The main character, Makoto Onodera, has grown up being abused by his own mother and sister since his father evaporated. One day, he decides to follow in his father's footsteps and become the leader of a sex cult! In the cult, what the guru says is absolute. Serving the guru has become a blissful pleasure for the young and beautiful female followers. The effects of "holy light water," an aphrodisiac-like liquid that is said to be a secret treasure of the cult, make the female followers captivated by their sexual desires.... Brainwashed female believers conceive the children of Oyasama and hope for the prosperity of the cult. They want to have children, and they just want sex! Sex! Sex, sex, sex. Makoto suddenly finds himself living in a harem of pleasure. He knows it is wrong as a human being, but he cannot escape from the pleasures of this life. As he spends his days in such a harem, a girl he had a crush on in school is forced to join. He has his doubts about how to live as a guru, but he is conflicted because now he can do whatever he wants with the girl of his dreams.... Having gained absolute power as a guru, Makoto surrenders himself to the pleasures of sex and falls into a state of degradation. A virgin man who was at the bottom of his life is worshipped as a guru, and is desired daily by his beautiful female followers. He pours his seed into them until he impregnates them.
Screenshot: 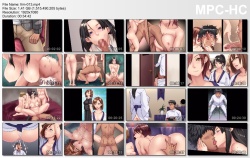