For emergency, Tomo St (Seiho) Hiyama cause hospitalized. One day in stable condition late at night and when I wake up feeling the 寝苦Shi, Nightmare world of obsession, "Mirage" was a stray. People wander out of the hospital, hit by a monster strange reason is suddenly encountered. But it was the men to get out of trouble by utilizing the special skills rushed there. While small, they met with a united people to fight off the monster, the relief cause. From them, "Mirage" is raging, They heard about the perpetual struggle between man and monster. And you have reason to know his skills to protect yourself in this world, Instead of having to protect themselves, that men are forced to become sex slaves. From fear of the onster, was the reason they also succumbed to the desire of men reluctantly dirty.
Screenshot: 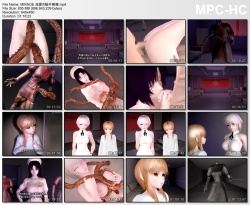