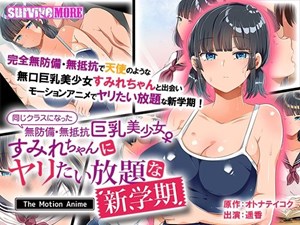 Spring is in full bloom. At the entrance ceremony of his new school, Shinya falls in love at first sight with Sumire, a beautiful girl with big breasts who is in his class. Sumire is not a standout, but she has a very cute face with a sense of transparency. And most of all, her big breasts are visible even over her school uniform. The protagonist decides to talk to Sumire, but he can't stand the fact that she doesn't respond to him. However, he couldn't stand the fact that she didn't respond well, so he stopped talking to her for a while.... Despite his concern for Sumire-chan, a girl in his class (the opposite of Sumire-chan, a cheerful type) confessed her feelings for him and Shinya decided to go out with her, but his first sex was not a good memory because he cared too much about her. I thought sex was supposed to be more pleasurable.... Then, Sumire and I were assigned to work on the day shift, and we were alone in the library after school.... We hadn't spoken since then, and the atmosphere was awkward, but Sumire spilled some water she was drinking and got her uniform wet. The protagonist quickly wipes her up, but she realizes that she is too defenseless.... He wants to tease Sumire, who is so unresponsive, and lightly touches her breasts, but she doesn't resist at all. What, why doesn't this girl question anything? How about this...! The girl I fell in love with at first sight was like an angel, completely defenseless and unresisting! Sex with her was not so good, but the sex with Sumire, which is fucked as you want to be fucked, is the best ！！！！The main character gets a taste of Sumire's sex, and he wants to fuck her all over the place! The main character originally liked Sumire. The new semester has begun and he's so happy to have Sumire all to himself...!
Screenshot: 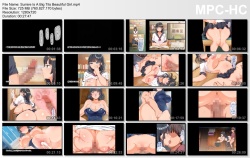