One Wintery day, just after the semester exams had ended, Daiki and his GF Yukina head over to his friend Hayato’s place. They were to have a celebratory party with Hayato and his GF Rin. Sitting around the heated table, they chatted and laughed and eventually, from the exhaustion of their studies, began to fall asleep… Who would have ever thought that this would be the prompt to cause… that… “Nnnh… ahh… AhHH…!” Unable to fall deeply to sleep, what should enter Daiki’s ears, but the sound of Yukina’s voice… Yukina, who was supposed to be sleeping in the room next door. (Hayato…! What the F*CK man, what are you doing with Yukina…!!) Hayato had taken Yukina into the toilet and eventually the sound of her moaning and groaning in pleasure resound throughout the house… Daiki trembles with rage. “If that’s how things are gonna be then…! I’ll get my revenge…! The same way…!” The cuckold becomes the cuck. An eye for an eye, a GF for a GF. If you are Netorare’d then Netori ’em back…! …and thus, the relationship of 4 friends, begins to crumble—-.
Screenshot: 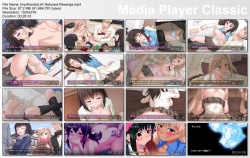