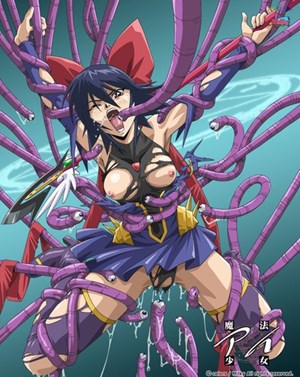 In a certain town, there were consecutive phantom assaults. Because the incidents were extraordinary, there was a rumor that a ghost or supernatural creature caused them. The students in Akitoshi's school were frightened. One day, an unknown girl appeared in the school. However, all the students except Akitoshi thought they had known her. Feeling strange, he shadowed her in order to investigate her but he lost sight of her. At that moment, he heard the scream of a woman from the nearby material yard and went to the place where the scream came from. There he found the beautiful girl of the school, Mikage. Mikage was surrounded by monsters Yuragi (fluctuation), and she was hanging naked. Yuragi noticed Akitoshi and began to attack him. Then, the fighter, Ai, appeared and cut them down. Akitoshi stared at Ai. What was her true character, an enemy or an ally?